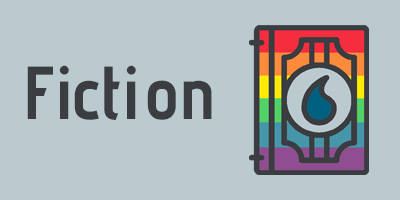 Anna grabs Recky’s hand, spotting her friend as soon as she enters the storeroom between their two departments. She pulls her down behind the grey metal boxes as she walks past. Recky’s shoulder connects with one sharp corner and she hisses, goes to complain until Anna presses her finger to her lips, covering Recky’s mouth at the same time. Recky’s hands go wide, pulling away, only to smack her head on the edge of the box. She goes to swear, the sound muffled beyond recognition by Anna’s hand.

Dizzy, she manages to pry Anna’s fingers from her mouth and gives her a pointed look. Anna shakes her head and points over the box to the other side of the cargo bay. Recky shuffles around on her knees and peaks over the box.

Over by the walls, hidden in shadows, their two supervisors deep in conversation.

She wants to say something but even though they can’t hear what the two people are saying, it doesn’t mean Anna and Recky can’t be heard in return. Especially seeing as her own supervisor Alvis is Canaren and can hear much better than humans. She’s surprised they can’t hear them already given the noise Recky made hitting her head. She doesn’t want to spy, but she’s aware now that they’re here, tucked into the corner, they’re stuck until the two are done.

She can’t imagine what they’re talking about, not standing as close as they are, down in the bowels of the complex. The two are friends, certainly, but she’s not known either of them to really spend much time with each other. They’re in different departments, but then, perhaps like she and Recky, they knew each other before they joined the complex.

Recky is grinning though, seeing something in their conversation she is missing. She’s desperate to ask her what she thinks, what she knows, but keeps her mouth shut.

Eventually, she sees for herself.

Recky’s supervisor is human, like them, a tall lithe man that Anna definitely does not have a crush on. Nor is Devon the reason she spends her tea break with Recky’s department rather than her own. Not at all. When he bends over, down to Alvis, she’s confused, until they shift slightly into the starlight coming through the viewport and she sees their faces clearly for the first time.

Recky is grinning, wild wide eyes and turns to Anna and winks.

Anna glances at her, opens her mouth to say something before, looking back at Devon and Alvis whose lips are moving slow, their hands following the lean lines of each other’s bodies. She shifts for a better look, hissing when she kneels on a screw.

Recky chuckles, rubbing the back of her head, then flops down on the floor suddenly. Anna looks back over at the two supervisors and sees them looking their way. She ducks down too, trying to squeeze herself further into the corner. The two of them wait, listening to the hum of the station as it maintains it’s orbit and finally, finally, the light footsteps approaching them.

Recky sucks in a breath, Anna closes her eyes.

A shadow passes by them, then another. The door opens with a swish and she dares to open her eyes for a moment. Recky is no longer grinning but when both Alvis and Devon leaves, she smiles again and Anna lets out a long huff of air the moment the door closes.

They look at one another, unsure what to say and Recky scrambles to her feet first, helping Anna out of the corner and cramped condition she’s in. She opens her mouth the say something but this time Recky puts a finger over her mouth and shakes her head. Anna nods, there’s a reason the two met this deep in the complex after all she supposes.

After a few beats, they link arms and head out the door themselves.

Writing.com challenge – write a story in less than 700 words with no dialogue.