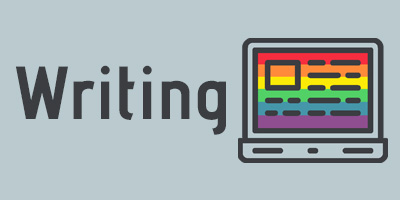 I’m going to try and put together my thoughts on Writer’s Apathy vs Writer’s Block.

I’ve always considered Writer’s Block to be the inability in knowing what to write. For me it’s not knowing what to write, what words to write next, being stuck – whether it’s stuck on the plot, paragraph or a word. It’s about not having ideas. Whether those ideas are at the start, middle or end of a project. Writer’s Block is about being stuck. It’s in the name. Writer’s Block. Whatever it is in your brain that creates your words and worlds is being blocked and you are unable to create.

I tend to suffer more from Writer’s Apathy.

Writer’s Apathy is more about not wanting to write even though you know what to write.

I am full of ideas. They’re spilling me at the moment and I’m as prolific as I ever have been in terms of writing. In the second half of 2018, I wrote forty-eight fanfics and eight original pieces. I still have counted how many poems I wrote last year, though I tend to write the most of them during NaPoWriMo and OctPoWriMo.

Between July 2017 and July 2018, I didn’t write any fiction. I kept my blog – Queer Little Family – up and wrote some personal essays but no fiction. And I had plenty of ideas, most of which just got shelved until I started writing fiction again. The ideas are always there.

The desire to write them is not.

Sometimes I just can’t write. But not because there is a block or I’m stuck. It’s because I don’t want to write. I don’t care enough to write. The dictionary definition of apathy is “lack of interest, enthusiasm, or concern,” and this definitely sums up my feelings sometimes.

Writer’s Apathy is a lack of interest in writing despite the fact that you love it. Despite the fact that you are a writer. It can be all encompassing and you lose enthusiasm for all writing, every genre and fandom you normally write for. Or it can be specific. For the last couple of months, I lost all interest in writing for Queer Little Family despite the fact I have spent three years building it up to be a relatively small but successful blog. I just didn’t care and it’s only recently I’ve been posting there again and making the effort. The same goes for the lack of fiction and fanfiction last year.

There are different layers to it, different reasons why I have lost interest or enthusiasm on any given day. It’s definitely tied to my depression. Much like my depression and anxiety, there is often no reason why I just don’t want to write. Even though at night I’m mulling the ideas over in my head to the point I can’t sleep or daydreaming fanfiction on the bus to work. Actually sitting down to write is just more than I can take on some days.

I’ve had people say they think they suffer from Writer’s Apathy too whenever I mention it but I’ve never really explained what that meant, or at least what it means to me. I hope this helps and it certainly helped sort through the thoughts in my head.